How The 4% Rule Shortchanges Retirees

This is NOT a hit on Bill Bengen, let me state that clearly, up front!

That man did wonderful things to advance financial planning as a profession.  So, I need to make sure there is no mis-understanding from where I am coming in this email.

But the problem I’ve always had with the 4% rule is it’s so FREAKING limiting on a retiree’s ability to enjoy the fruits of his labor!

Just look at this chart. 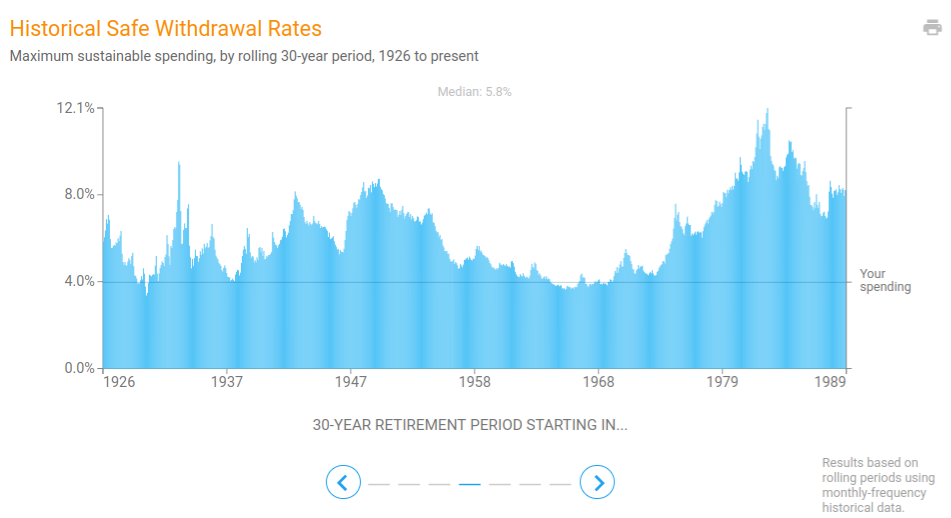 This is a portfolio of 60% US Large Cap Stocks and 40% US 10 Year Treasury Bonds.  The retiree is taking 4% a year from this portfolio adjusted for inflation. Look at the X-axis and follow the line at 4% horizontally.  Notice only on the rarest of rare occasions did the portfolio go under.

So, while taking 4% a year surely reduced the likelihood of one not running out of money, man oh man, it did so with some serious opportunity cost; The ability to ENJOY IT!

If you retire today will you be decorated in gold or will you be wearing a barrel for clothing in 30 years? You have no idea!  And that’s the problem with this whole thing.  The 4% rule, or ANY rule derived on the past to project future returns, is nothing more than a guessing game.

I was talking to some wonderful folks last night.  They want to go to Ireland for a couple months. They can afford it, for sure. Is it irresponsible for them to go, after all their Monte Carlo projection “only” shows a 95% chance of their money outliving them?

NO! It’d be irresponsible NOT to go.  For Heaven’s sake, look at that chart again.  The VAST, VAST majority of time you could have spent well above 4%. So, to stay home, watching Pat Sajak on TV while eating Ramen noodles…just in case a calamity happens, is crazy talk.

I mean just look at this:

Solid blue except for a couple scenarios.  And even those scenarios when you ran out, your money lasted well past 20 years.

Remember too, this assumes you’re spending 4% of your portfolio value the first year and adjusting it with inflation each year thereafter.  If you’ve been following for more than a few days you know how I feel about that entire scenario.  “Show me the evidence that retirees actually spend like that!”

The evidence, in fact, is vastly in the other direction. That retirees spend LESS as they age, not more. So, to use the 4% rule as a spending model at the start of retirement, is WAYYYYYY too conservative, especially on the front side of your retirement when you’re itching to do stuff you’ve been putting off because work got in the way.

Now, if living like a pauper so your kids can live like kings is a priority, the 4% rule works great.

Just look at all that money you’re leaving to them!  Isn’t that nice of you…

Ironically, I’ve yet to work with someone who said it’s a priority for them to live cheap so their kids can spend like royalty, myself included.  Shoot, I’ve got 4 kids. I love ’em all dearly. Leaving them millions at my demise is not on my bucket list of things to do, though.