My New Year’s Hope For You

This video has over 75,000 views and thousands upon thousands of hours of watchtime.  Obviously, it hit a nerve for many folks. Shoot, many of YOU, reading this now, may have found me through this video.

I wanted to bring it back to your attention today because of the concerns I know many of us have about retirement.  We’re worried.  And rightly so. Worry is human nature.   But I want to try to kick you in the butt a bit to try to not worry so much.

I have a client who’s dad served in the German Army during WW2.  His dad, like almost all young men in Germany during that time, was conscripted to serve, at the literal barrel of a gun.  Because of the insanity of Hitler attacking Moscow and forgetting that it gets cold in Russia, the German army was defeated and thousands of Germans were taken POW.  My client’s dad being one of them.

When the dad was getting older and death looming my client asked him what regrets he had.  The dad said, “Not to worry so much”.   Now, remember, this was a guy who lived under Hitler and served as a POW in a Stalin prison camp.  And yet his biggest regret? Not to have worried so much!

What can you take away from that? Well, hells bells, it’s awful hard for me to think of a worse scenario than what that guy had to go through and as such maybe I can heed his advice and worry a bit less too. Will my future include being drafted into Hitler’s Army, fighting the Commies in Russia, in the winter, being sent to a POW camp under Stalin’s reign of terror?

Probably not.   And you probably won’t face these same horrors either.

Now, that doesn’t mean you shouldn’t prepare and take precautions. But for the love of all that is good, the one thing you must tell yourself not to do is not listen to the “experts”.  Experts exist for the sole purpose to get you to worry so you buy their snakeoil… 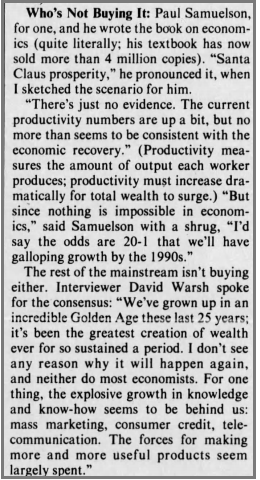 If you would have listened to these fools you’d have missed out on the biggest wealth creation the world has ever seen from 1985 through 1999.  Not only was Samuelson wrong here, this MIT economist and Nobel Prize winner also called for the Soviet Union to overtake the US in economic dominance in the same year that the Soviet Union disintegrated.

Look, I’m not here to pick on Samuelson per se.  But, my goodness people, Samuelson literally wrote the daggum textbook on economics that was (hopefully not is) used to teach millions of students about economics. INSANITY!

Yet, even with Samuelson’s horrific predictions he is still held in the highest esteem.  Yet, you ever heard of Irving Fisher or James Glassman? They made glowing predictions about prosperity in the markets right when the markets were to tumble and as such we essentially never heard of them again.

Fear sells. Optimism does not.  Yes, you don’t want to be overly Pollyannaish. But don’t be a Debbie Downer either where the sky is always falling.  Not only will you be wrong, but you’re boring too. Those types are a dime a dozen.

For some reason we incentivize the naysayers by holding them into the highest esteem when they are right, see Robert Shiller – Irrational Exuberance. But when they are consistently wrong we hold out hope that maybe “this time they’ll be right, again.”   Maybe we should be asking  is if Shiller was the equivalent of a broken clock and just got lucky?  Maybe Harry Dent got lucky the one time he was right? Maybe David Swenson got lucky when he was investing in Timber during the Global Financial Crisis (CFC)?

Some people do get lucky when they call a decline in human activity.  But since the advent of the market-based system in the 1700’s the march of human prosperity has gone on and on.  Beating back Nazi’s, Communists, Segregationists and everything else in its path.  To conclude that this will stop because of X, Y or Z seems a bridge too far for me to walk down.

The reality kicks in that in your little neck of the woods you will manage your financial affairs the best way for you.  All the damn naysayers in the world aren’t going to change your common sense, which is that when things get tight, you tighten your belt.  When things are good, you splurge a bit more.  This is how real people with real retirements live.

In economics there is something called the Substitution effect.  Price of beef goes through the roof, you buy chicken.  People win Nobel prizes for identifying stuff like this, things that anyone with common sense understands because they live it every day.

Did you win a Nobel prize for the day to day arrangement of your affairs? No.  So, why get all caught up in listening to people who are expert only in putting into words for other “experts” activities you do daily?

Stop listening to these people and just live your life.  That is my hope for you in the New Year.