Retirees Have Much MORE Income Than Is Reported

Let me ask you a question…

“During 2018 did (you/ anyone in this household) receive any pension or retirement income from a previous employer or union, or any other type of retirement income (other than Social Security or VA benefits)?”

How would you answer that?

If you have a military pension would you answer you did NOT receive other income because the question specifically excludes VA Benefits?

How about if you had an IRA distribution? Would you answer you did NOT receive other income because the question asks about any pension or retirement income from a previous employer or any other type of retirement income?

Well, it turns out when asked that exact question, many people, retirees in particular, answer it wrong. Thus the information we’ve been lead to believe regarding income retirees actually have has been understated by as much as 30%!

The Census Bureau is charged with identifying income within the US population.  It’s been very good at identifying earned income, i.e., how much you make at work.  But it has completely bombed in identifying IRA distributions, Social Security income, military pension income AND dividends and interest among the retired set.

For starters, according to research done by the Census Bureau itself it found:

What we see here is that the Census Bureau survey under-reports dividends and interest by huge amounts.  This is problematic because those two sources of income represent 11 percent of income for people 65 and over.

Oh, but it gets worse!  This report states “distributions from IRAs are rarely reported.”   That’s actually not hard to believe when you look at the question I asked to start this post.  Again, here it is:

“During 2018 did (you/ anyone in this household) receive any pension or retirement income from a previous employer or union, or any other type of retirement income (other than Social Security or VA benefits)?”

Because of the confusing nature of the question we are left with this:

Add to this issue that military veterans may “misclassify their military pensions as VA benefits” and you have a situation which vastly under-reports reality.  So much so that:

The Census survey captures only 76% of older populations income!  That’s a big deal, my friends.
And yet, the Census Bureau survey is used by countless researchers, to include our own Social Security Administration.

Unlike after being warned about its mistreatment of widows, the SSA has actually taken corrective action to try to fix reporting on data used from the Census Bureau: 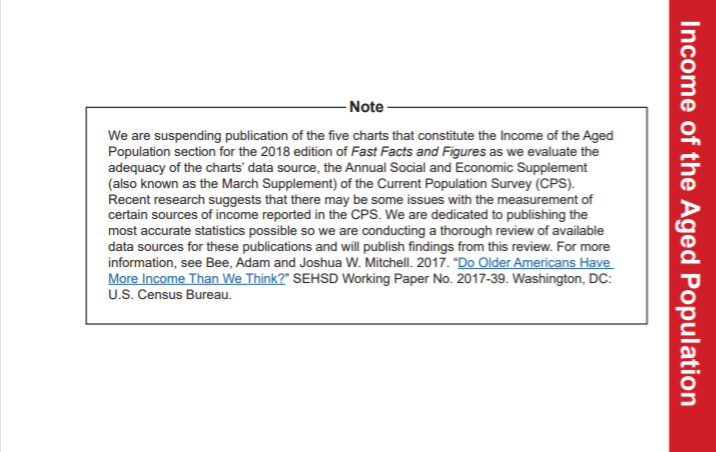 Certainly, much ink has been spilled warning us about the retirement “crisis” and using the Census Bureau data “proves” it exists, no?  Will these doomsday predictions retract their previous warnings with this updated data?

Of course not. There’s money to be made in predicting doom and gloom after all. History is full of such shenanigans.  Shoot, Paul Ehrlich is still prominent.  Even the “hide the decline” climate researchers still have street cred among the fear-mongering set and are being paid accordingly.

For some reason, fear sells. As such there will always be people peddling it.

But sometimes reality does raise its head for ANYONE who desires to see it: 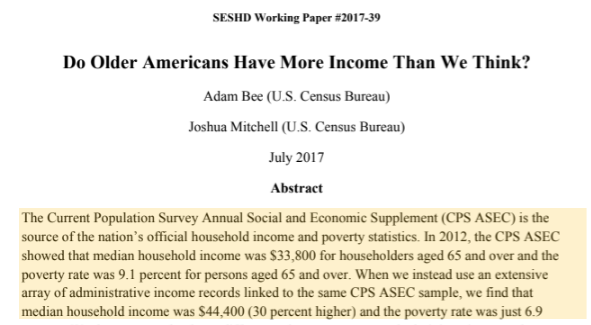 So there you go, right? PROOF that retirees have much more income than we’ve been lead to believe.  BUT, there’s even more to be happy about.

We’ve also been told, repeatedly, that Social Security has played a much larger role in a retirees financial security than is actually true. 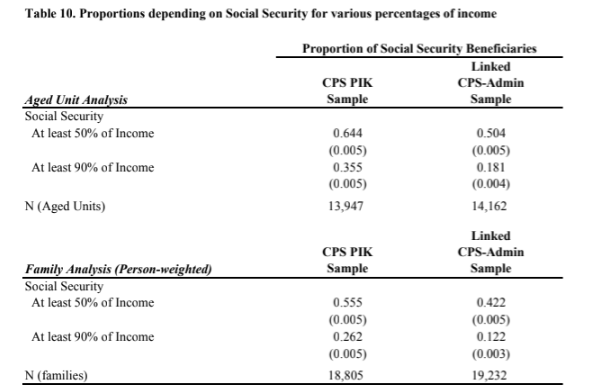 Now, don’t get me wrong. I LOVE Social Security. It’s NOT a welfare benefit. It’s a forced savings program that has helped nearly every American in retirement.  Is it perfect? Nope. Will it need to be adjusted? Yup.

But of all of FDR’s shenanigans, Social Security is one that I support fully.  Would I have back when FDR signed the legislation to make it law of the land? Nope. But that’s water under the bridge now. It’s here and needs to be solidified.

However, let’s stop with the silliness of overstating Social Security’s value in order to advocate for an even bigger government role in retirement planning. You read people like Teresa Ghilarducci  and they want nothing more than MORE government intervention into your retirement plan.

In fact, ironically, she and a big-wig financial executive have called for MANDATORY retirement savings that will be managed by….take a guess.

Never mind the fact we already have mandatory retirement savings.  Apparently, for many, what is already mandated is not enough. Why? Because, didn’t you get the memo? We have a retirement ‘crisis’!  How do we know it’s a crisis? Because of the lack of income that retirees have.  Haven’t you seen all the studies???

And this is why I was STUNNED that this research paper was able to get through the editors at the Census Bureau. For once, we have research that is not only NOT self-serving , i.e. rent-seeking, but it paints reality in a much more optimistic light than previously thought.

Hopefully, we’ll see more of this kind of stuff in the future. Reality > fear!