The Way OUT of An Economic Emergency

It Pains Me To Write This But…

The Mainstream Media still has enormous power and, as such, many people’s financial lives are about to be turned upside down.

Disagree and even unsubscribe if you must but this Coronavirus fear is nuts.  As of RIGHT NOW, in the US, there are 3244 confirmed cases with 62 deaths.  40 of those deaths are in Washington State and the bulk of those are from ONE PLACE.

Yes, Italy is struggling.  But did you know “the combined mortality rate for France, Germany, Switzerland, the Netherlands, the United Kingdom, Denmark, Sweden, Norway, Belgium and Austria (which together have around 2/3 the total number of confirmed cases as Italy) is less than 1 percent.”

Of course, deaths are easy to identify. Actual people contracted the disease not so much.  So, we can safely assume that the death toll/infected is MUCH lower.  Pretty simple stuff here.

China still is reporting 3203 deaths of which 3085 are in ONE location, Hubei.  Not much change since yesterday. Do I trust Commies? No. But what else are you going to go on?
South Korea seems relatively stable at 75 deaths and just over 8100 cases. 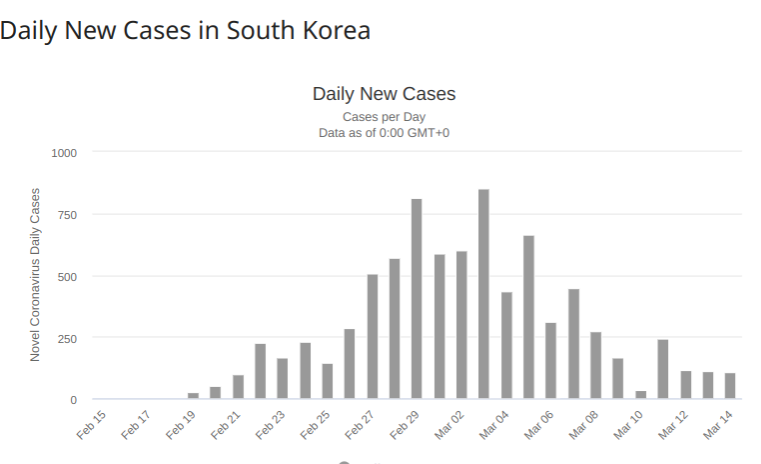 You can track this info yourself here.

Unfortunately, in the Home of the Brave, in my locale, we’re told that no one, and I literally mean NO ONE, should be on the community tennis courts due to risks of the virus.  Hoboken, NJ, apparently is enforcing curfews from 10pm to 5am.

Again, this is nuts.  Some crazy guy on Joe Rogan’s show says MILLIONS could die, Obama’s former director of the CMS, the same thing, and VOILA, EVERYONE panic!

This is Public Choice economic theory in full view for all to see.  Bureaucrats want to expand their power.  Out of office political hacks the same. People involved in a certain line of work the same.  And the way they do that? Scare the living hell out of people.

Why do you think FIdelity investments publishes it’s annual “Estimated Cost of Health Care in Retirement”?  (I’m linking the 2015 version here because it’s the first that came up. But trust YEAR In, YEAR Out, it’s the same thing…)

Fidelity publishes this with the full intention of SCARING YOU.  You aren’t saving enough!  You need help!

And thankfully the good folks at Fidelity are there. “In addition to helping investors prepare for the escalating costs of health care in retirement, Fidelity offers education on a broad range of retirement savings issues, including: asset allocation in 401(k)s, 403(b)s and IRAs, developing a retirement income plan, and how to rollover a 401(k).”

Unfortunately, the fear is setting in and is going to hurt innocent people.  From Instapundit.com comes:

VIA EMAIL FROM OPEN TABLE:

Looking at comprehensive data from restaurants on our platform — across online reservations, phone reservations, and walk-ins — we note sharp declines over the last week. In the United States and United Kingdom, we see a 20 percent reduction in total seated diners vs. last year. Mexico and Canada are down 15 to 17 percent. At the city level, diners are down approximately 45 percent in Seattle, 40 percent in San Francisco, 30 percent in New York, and 25 percent in London, Los Angeles, and Chicago. (All declines cited here are on a year-over-year basis.) . . .

There are going to be millions of people with significant income losses because of the media hysteria.  Some could potentially lose their homes.  But hey, small price to pay if it hurts Trump, right Bill Maher?

In fact, I’ve already had not one but TWO people pull out of a potential financial planning relationship due to waiting until this all blows over.

Thankfully, I DO have enough revenue from other sources and ALL my debts are paid that I can last for a few months.  But if you work hourly, in commissioned-based sales, for tips etc. you’re going to be in a world of hurt.  By no fault of your own.

BUT, there is an obvious solution.  Japanese once again shows us the way…by what they did NOT do.   We can look back to our own situation in the late 1920s too and NOT follow that model.

Yes, you can argue with me here.  But you need to show evidence that in the modern era large deficits and debts lead to hyperinflation, as is the concern.  None exists, that I’m aware of. The opposite does, though.  Japan and the U.S.

Watch this video where I show you what needs to be done. The time is now.