Why Do They Keep Doing This?

I get it, fear sells, but this is ridiculous…

Did you know that “Almost 60% of working age (21-64) individuals do not have any retirement assets from an employer-sponsored 401(k) type of plan or an IRA or defined benefit pension?”

I didn’t either.  Seems a bit odd to me, actually. But hey, a Georgetown PROFESSOR made that statement so who am I to question it, amirite??? (I did a video on this here by the way.)

And this same Georgetown professor says “America’s retirement crisis will keep getting worse unless we try something new.”   The talk of “retirement crisis” always gets me wondering so I clicked through some of the links she provided to back up her claim.

Notice anything here? The Georgetown professor explicitly said 60% of working-age Americans have no retirement plan OR defined benefit pension.  Yet, the research she cites actually states THEY DO NOT INCLUDE DB pensions.

Then we go down a bit further to see the research and find: 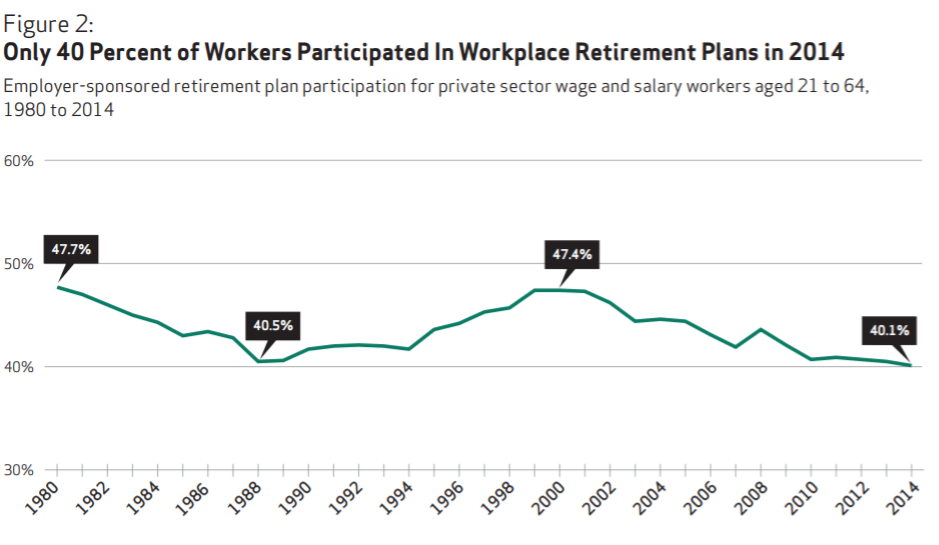 As you can see, the amount of working age Americans with, or without however you want to look at it, hasn’t changed all that much in 40 years.    Was there a crisis in 1988 then?

“But Josh, most people had pensions then!”  No.  They did not.  We need to nip that in the bud once and for all this idea that nearly ALL Americans had pensions.  This is fantasy-land thinking.  I’ll allow you to do your own research on that, or you can just read my new book “You Can RETIRE on Social Security”.

Now if you want to REALLY dive into the details of the “research” the Georgetown professor cites to scare us all look at this: 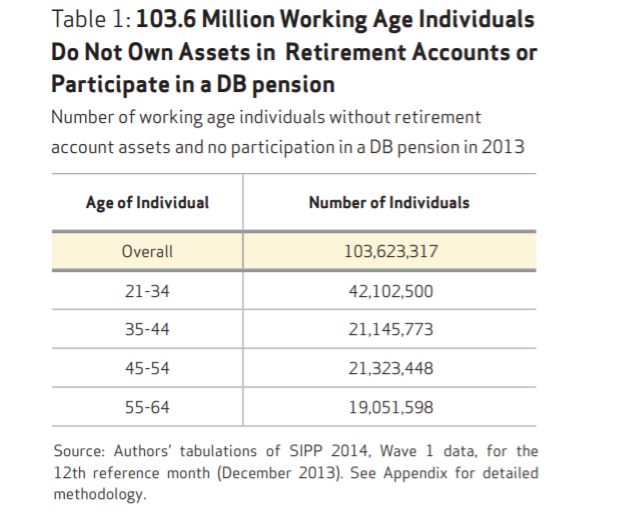 Anything weird here?  Look at it, hard… Take your time.

So, which is it??? To conflate AND and OR is a big deal.  Given what they previously said about NOT including DB plans, we’ll go with the AND, meaning that even your ole buddy Josh would be thrown into this “study” as one without a retirement plan AND a pension. I have a retirement plan but no pension.  Thus, CRISIS TIME!!!

Secondly, notice anything odd about the table.   The first column has ages 21-34, a 13 year age group.  And that is BY far the largest cohort of “working-age individuals” without a retirement plan of some sorts.  Yet, the other cohorts are separated by 10 years apart.

Why not have that first cohort ages 25-34 to be consistent? Well, we know why.  The ages 21-25 include many college students, who are working age, indeed, but are not working full time, if at all, and thus not participating in a retirement plan.

When I was 23, I was in my second year at George Mason. I was working 2 or 3 jobs, while at school, but not one place did I have a “retirement plan”. Yet, I did have mutual funds, but those taxable accounts aren’t included in this study either.

But if they were to show consistency and take out the people who are in college or recent graduates, the numbers would GREATLY be reduced, and thus would take away their fear-mongering headlines.

Just think about what you were doing in your mid-20s. You were still searching for that “perfect job”.  Probably not settling in to anything yet, which means, the company retirement plan was not your first priority.  Yet, as you got older and started settling in you started participating.  And guess what? That’s exactly what we see in their chart above.

So, let’s just close this up by me saying “Don’t TRUST anything in the financial media until you read more!”