How Did 30 Years Become The Default for Retirement Planning?

I imagine most of us know someone who has lived well into their 90’s.  But we also probably know MANY more who never made it within a country mile of 90 years old.  In fact, I’d venture to say the vast majority of older people you’ve known never made it to being 90 years old.

Yet Retirement Planning 101 has us all preparing for a retirement of 30 years, even though that is just not likely to occur.  Why is that?

Where did the 30 Years in Retirement Originate?

Well, for starters the premise of the 4% rule was based on how long a portfolio could last taking out 4% a year from a 50/50, or 60/40, portfolio and adjusting it with inflation.  (The reason I say 50/50 or 60/40 is because depending on which study and who you talk to about the 4% rule the stock exposure changes a bit.)

In fact, it’s odd when you read Bengen’s exact words: “Assuming they have normal life expectancy’s, they should live at least 25-30 years.”

Assuming NORMAL life expectancy they should live at least 25 years. And that’s it.  Nothing more than that one sentence and the 30 year rule for retirement planning was born.

As I’ve stated before, I am not trying to find fault in the author of the 4% rule.  I am actually finding why it is we in the financial planning industry have simply defaulted to using it when it comes to retirement planning.  Why not a 5% rule with a 25 year life expectancy for instance? How would that change things? 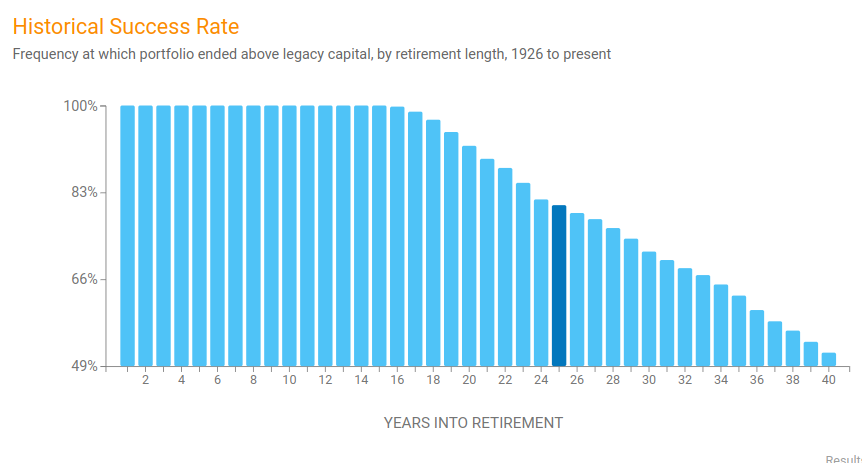 The above is an image using a 60/40 portfolio and its likelihood for success.  A pretty big difference in the success rate for 25 years, the dark line, and 30.

My argument is quite simple, actually, using 30 years for a retirement projection is going to limit the amount of money people can withdraw in the “go-go” years of their retirement.  Those are the years they want to do stuff; Travel, spoil the grand-kids, help support various organizations with time and treasure…etc. You get what I’m saying. The first 10 years of retirement are typically when people get busy and it takes money.

Yet, the 30 year retirement scenario would limit that, a lot, because it says “YOU ARE AT RISK OF RUNNING OUT OF MONEY!!!”   But are those retirees truly at risk if they don’t live for 30 years?  Don’t we need to look at the ACTUAL likelihood of that?

The image above is from the 2012 Global Financial Stability Report from the IMF.  Notice anything odd? The Population Life Expectancy in column 3 has a male at 65 in the US living another 17.5 years.  Now, that does NOT take into consideration future improvements in longevity.

Now an even more interesting thing is the rapid increase in obesity in the population.  At the risk of offending folks, how many people who are well into their 80’s do you know that are obese?  Not many, I would suspect. 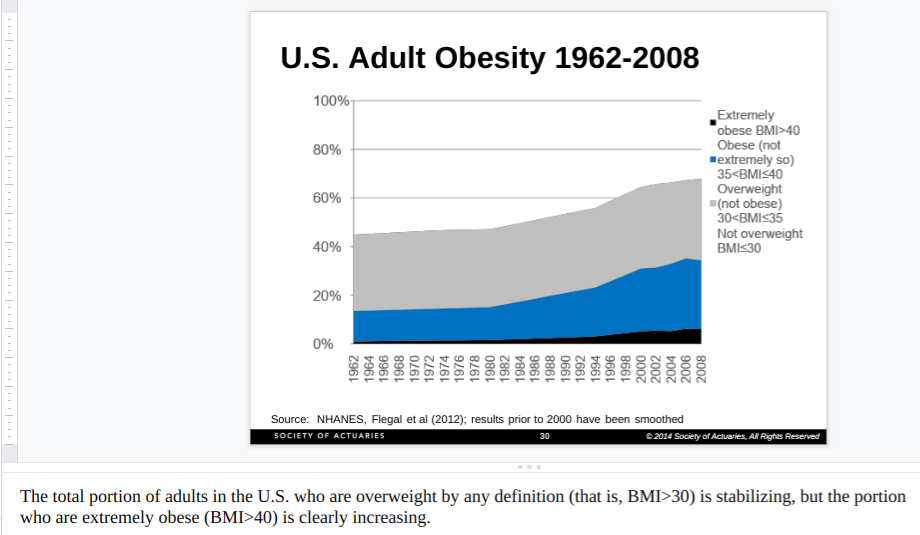 The Society of Actuaries reports that nearly 70% of Americans, as of 2008, were overweight, i.e., with a BMI over 30.  For the record, I fall into this category.  Now, there is a lot of debate about what a “bad” BMI truly is. Is being over 30 but under 35 acceptable?

But there is not much debate about a BMI over 35… 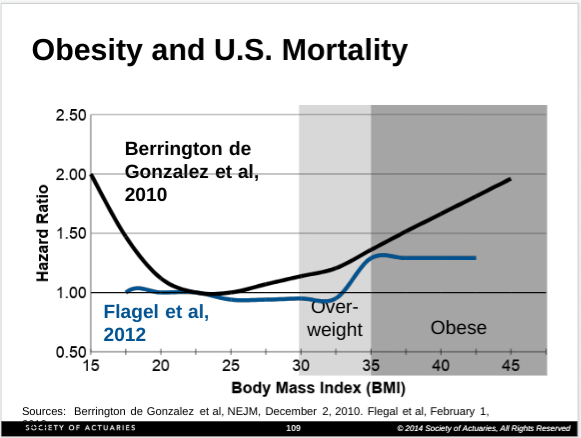 “The morbidly obese (class 2+, BMI > 35) are clearly at mortality risk. The fastest growing population weight segment. Class I obese (BMI between 30 and 34.9), although certainly a morbidity risk, may not be a significant mortality risk

The relative mortality risk of those overweight (25>BMI<30) is still in question, with inconsistent results from different studies"

In this case over 1/3 of the U.S. population is “clearly at mortality risk.”

Side note: Thank GOODNESS we listened to all those “scientists” in the 70’s and 80’s telling us to eat less fat and more carbs!  Always gotta listen to the scientists we are told, constantly!

Let’s look at a couple more charts from the Society of Actuaries. 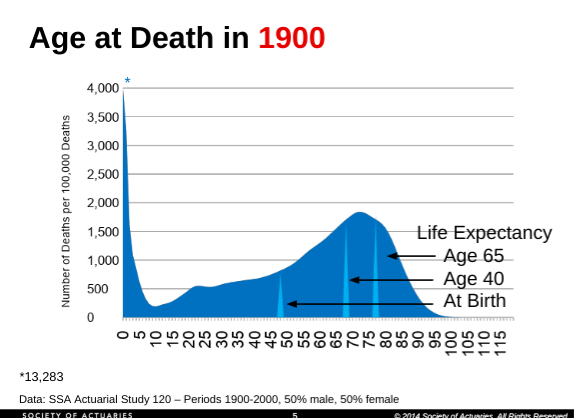 In the above if you made it to age 65 your life expectancy was to live until around 78 years old. 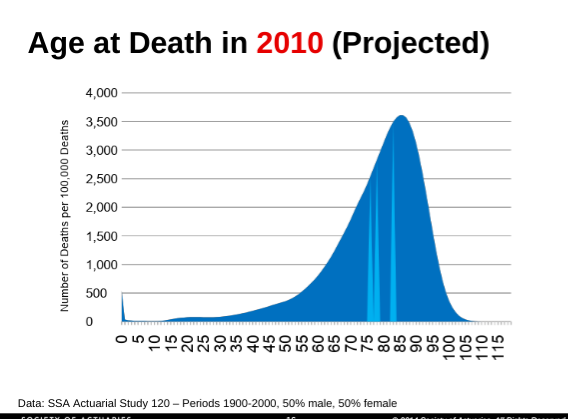 Fast forward until 2010 and if you made it to the age of 65 your life expectancy was about 84 years old. While that’s an improvement you’re still living FAR less than 25 years, never mind 30.

The biggest improvements in life expectancy’s have been greatly, greatly reducing infant mortality. In 1900 at you only had a life expectancy of 47 years at birth.  Now it’s 78.

The Society of Actuaries adds this interesting note:

Given the higher mortality rates typically experienced by blue collar participants, users should carefully consider the underlying characteristics of the covered group before automatically selecting the (Total) Employee and (Total) Healthy Annuitant tables, especially for covered groups that contain a large percentage of white collar (or highly paid) participants.”

That would have a dramatic impact on pension liabilities, of course. The shorter the life expectancy of pensioners, the less the employer is obligated to pay out.

But, the same can go for YOU too!  The shorter the REAL life expectancy for you, the less your portfolio is obligated to pay out and inherently the MORE you can spend on the front end of your retirement.

Ultimately, very few people are actually living 30 years in retirement, regardless of when they retired, at 62 or 65.  They haven’t in the past, they are not today, and likely will not in the near future.

I argue this provides evidence that you CAN spend more, or retire earlier than you’ve previously been told.

Now, be advised, if both your parents survived into their 90’s, you worked a white collar job, your BMI is below 30, you don’t smoke and don’t weave your motorcycle in and out of traffic, you’re probably one of the people who will live 30 years in retirement.  So, plan accordingly.

But for the rest of us…maybe it’s time to think differently.