Markets Are Down! You sure about that?

I posted this video yesterday where I was pondering the idea of just selling everything, paying taxes and reducing my debt. I won’t go into it here as to my thinking as I did that in the video, but suffice it to say I received many comments and emails questioning my strategy, especially given the markets are “down”.

Now, I haven’t committed to doing this yet, mainly because I don’t have enough net of tax to pay off my mortgage. But if I did, I think I would liquidate everything and be debt free.  Pray, Pay Off Debt and Travel Light, is my mission.  Again, for my reasoning on this please see my video.

I want to address the idea though of the markets being down.  Are they? You sure?  Now, be advised, I am not trying to convince you to do something I have not done myself and may not even. I’m not doing anything, anyway, until next year, the new tax year.

It’s important though to get a real gauge of the markets.  The markets are NOT DOWN, not by any stretch.  Case in point – Wellington Fund, Total Stock Market and Wellesley.  Every single one is above where they were in 2020, even with this year’s decline.

The following is from Jan 2021 through October 2022.  Yes, Wellington and Wellesley are down but the Total Market isn’t. 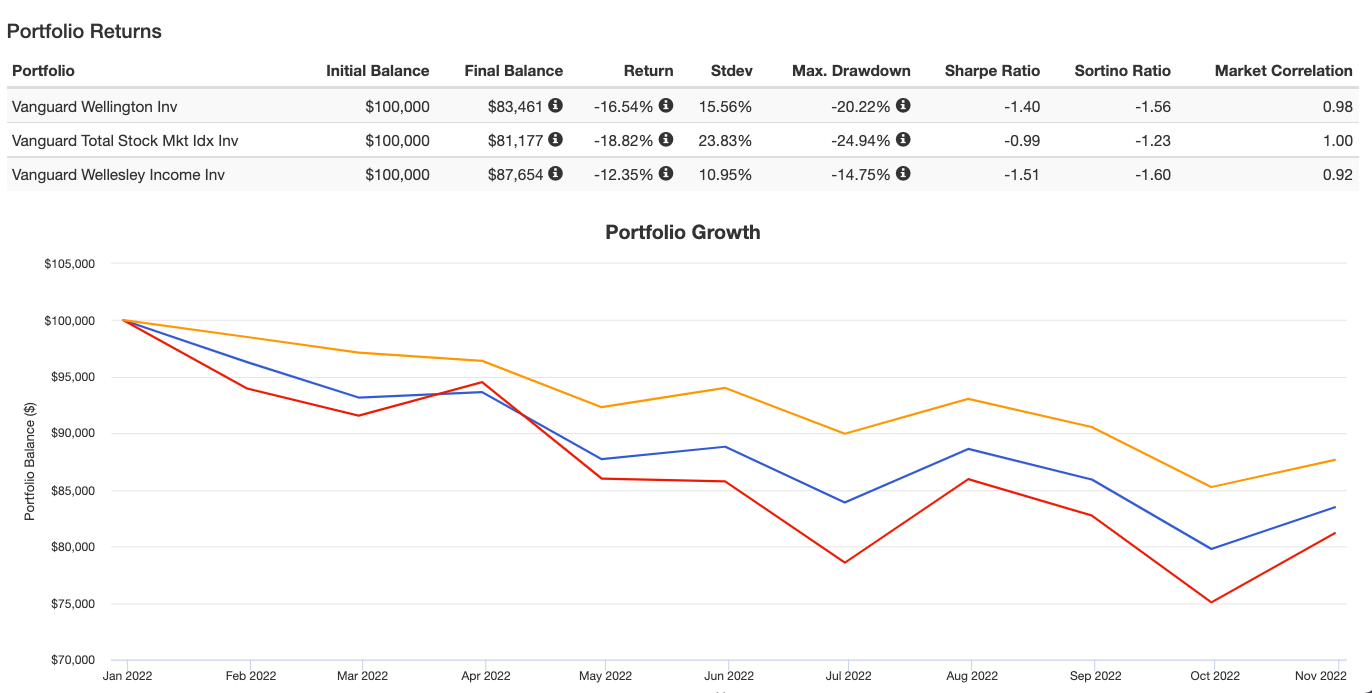 Let’s go back to the last ten years shall we?

Definitely not down, even though the bond market has had its literal WORST performance ever in 2022.  Did you hear me? The WORST. BOND, MARKET. EVER!!!

Are you really down? NO!  That’s what I’m trying to say.  The markets have grown significantly for years, decades even.  But the past growth doesn’t mean it will continue.

Maybe I’m like a child raised during the Depression who didn’t squander anything even when times got good.  My grandparents come to mind.  I was ten years old in 1980 when Grampy took my little brother and me to a San Francisco Giants game. I was stoked.  We were going to get hot dogs, popcorn, soda, cotton candy etc.  I mean that’s what you get at a baseball game, amirite?

Oh no…as the game wore on, and my anticipation was boiling over wondering when we were going to get the goodies to eat, Grampy busted out the PB&J’s and sliced carrots he had brought with him.  What? Okay, well at least we’d get a soda, right? Nope. Water fountains were available and it was free!

Grammy and Grampy did take us to Denny’s once which was pretty cool because I got to eat chocolate pancakes.  But ordering orange juice? You nuts?  That stuff was expensive, even in California.  The water was free so we’re drinking that.

As we were wrapping up to leave, out of the corner of my eye I noticed Grammy stuffing leftover biscuits and those small grape jelly things into her purse. She winked at me with a look that implied “can’t let this go to waste now can you?”

Now remember, my grandad retired as a Captain from the Navy, in fact he was a test pilot in the same unit as John Glenn. (Side note, his three older brothers were also aviators in the Navy. His brother Richard actually took out the Japanese cruiser Chikuma.  He’s interviewed here as part of the  Veterans History Project. Pretty interesting stuff.)

So, Grampy had a Navy pension plus he was a commercial pilot. It wasn’t like Grammy and Grampy didn’t have money. It’s just their childhood had such an impact on them they always remembered what it was like to have nothing.

Back in the late 1990’s when Charlotte and I lived in Phoenix we went up to see Grammy and Grampy in their Los Altos, CA home. This was the first time Charlotte met them so Grampy spoiled us by making his famous sauerkraut with sliced hotdogs for dinner. He was German through and through after all.  For drinks we split a 12 ounce can of Coke. If memory serves, Grammy didn’t drink Coke so Grampy, Charlotte and I got 4 ounces each. After that, we drank water, again, because it was free.

Mind you, Los Altos even then wasn’t a cheap place but they had been in that same house since the late 1960s. Today that house would easily go for north of 3 million. But, as is typical of the Millionaire Next Door, you’d never know they weren’t strapped.

This is the mindset of children of The Depression. “Waste not, want not”.  I’m sure you have your own stories you can share about your parents and/or grandparents.

My point being is that I just can’t get over what happened in Japan from 1990 through 2011. $100,000 invested in the Nikkei in 1990 would be worth all of $28,000 at the end of 2011. Yes, inflation was not a huge issue but prices certainly did increase during that time. It wasn’t like Japan was an emerging economy or one run by Commies either. It had already emerged into the titan everyone thought it was in the late 1980’s.

Even if you were only pulling 1.9% a year, as some of the doomsdayers are telling us is the new safe withdrawal rate, without even adjusting it for any inflation, you still ran out of money in year 23.

So let’s go back to the graph but this time let’s see what the US markets have done from 2009 until now.

Not quite the run-up of the 14 years of Japan but you can see some similarities, eerie similarities, no, even with the 2022 bear market? I certainly do.

This was written on March 10th, 2021.  What were the 10 year rates then? 1.53%. Where are they now? Well for the last month they’ve been hovering around 4%.  Let me remind you of an article Phil Gramm had written in the Wall St. Journal way back in 2013. You can get the article here without going through the WSJ firewall.

Since the World War II era, the average maturity of outstanding federal debt has been about five years, and the average interest cost on a five-year Treasury note has been 5.9%. At this interest rate, the expected cost of the Obama debt burden will eventually approach some $590 billion per year in perpetuity, exceeding the current annual cost of any federal program except Social Security.

You see, we don’t even need to go back to the 5 year Treasury yielding 5.9% to get to where the interest on debt exceeds Social Security as the biggest expense the Federal Government has.

This is not fear-mongering to ask the simple question “How long can this go on for?”  Man, I don’t know. You don’t know. No one knows. But this goes back to my fundamental concern: what if a Japanese scenario emerges in the States where many people get wiped out? Okay then the next logical question would be “If that happens who are the people who would get wiped out?”

Thankfully, the answer is in front of you, if you only choose to see.

“Debt paved the road to ruin, so the game was to calculate what could be saved by doing without. One of the warnings that the world could end was the foreclosure of a mortgage on a home.  It happened only once or twice (in the town in which she is writing about) but when neighbors read in the newspaper of a foreclosure of an old couple they grew pale with shock. They knew all about the illness or accident that kept the mortgage from being paid.

Borrowing money was disapproved of and buying on time -except for houses or land – was unknown. All borrowing was frowned on as too complicated and uncertain.”

“Although nearly a million farmers across the country lost their farms to foreclosure in the early 1930’s these farmers were in the minority.  Mot farmers carried only light debts or none at all and had little fear of losing their livelihoods or their homes in these uncertain times.”(141)

By the way, I HIGHLY encourage you to buy this book now if you’re interested in it.  It has been out of print for a while now. Seems there are some copies available but no clue how long they’ll be.  Carrie, who was my professor at George Mason, told me it’s on the publisher as to when or even if to publish more copies.

Allright, to close this up, I have no clue what’s going to happen.  But I know this. Debt doesn’t cease to exist even if your assets do.  What if your very place to live, your house, is leveraged and suddenly you can’t pay the debt because your job is no longer AND your assets you previously relied on are gone?

You think this is a scare tactic? Let me remind you of 2006-2010.  I was in the financial business back then too.  My very income was reliant on the investments of my clients.  So, the markets fall off a cliff.  What happens to my income? It too falls off a cliff.  What happened to my debt as I was heavily leveraged with a big, fat mortgage? It falls off a cliff too? Of course not!  It’s still there, staring me in the face.

Yet now, because my income is much lower, my debt requires a larger percentage of my income to pay back.   Oh, no worries, just sell some investments to help, you say? Did you not hear before, investments fell off a cliff.   So sell when the SP 500 is 57% down and because it’s in an IRA/401k I still have to take a 10% penalty on top of the tax I’ll pay???

Oh, by the way, you can’t forget how many people lost their jobs, i.e., their very income, during that time too.  I was fortunate that I landed a stable job with USAA about 6 months before the real crap started hitting the fan.

Which brings to mind what happened in 2000.  The markets fell through the floor again. People at the Schwab unit where I had just left to take a job in a bank were getting laid off left and right.  At that point I was renting so it was much easier for us to up and leave to go to where the jobs were as opposed to staying in place. However, I remember many people who were stuck in both 2000 and 2008.  Loan-to-Value (LTV) on their home was over 100% meaning they owed more money on their house than it was worse. They were upside down.  Can’t sell your home to move to find work if you’re upside down.

Two times in my career I’ve witnessed this with my own eyes.  I also am a student of history enough to know what happened in the US in the 1930s and Japan in the 1990s-the Aughts.

Thus, I don’t want to hear about the markets being down.  This isn’t down! This is a sneeze.  It’s when the flu comes where the contagion hits.  And the contagion hits everywhere at the same time. I want to be free from that contagion, no vaccine necessary.