The Best Investment Over the Last 150 Years Is…

Housing. Okay, I’ve spilled the beans. I guess we’re done here.  Thanks for reading! 😀  Let’s dive into this shall we?

So, I’m finishing up the rough draft for my soon-to-be-released next book “Relax & Retire – Debunking Inflation Fears”  when I come across an article from my “stack of stuff” as Rush Limbaugh used to say.

From the Friday May, 26, 1978 off the Dow Jones wire comes “Stocks as an Inflation hedge – Challenging the popular market view”

Can they be? Sure. Can AOC be right once in a while? Yup.  Doesn’t mean it’s likely to happen though. Not likely enough you’d want to bet your entire retirement on the proposition that’s for sure.

The interesting thing about the article above was the citation of a guy named Robert M.Soldofsky. You’ve never heard of him and I’ve never heard of him. But he was an interesting chap.  The best part of his bio was his enlistment as an infantryman in the 10th Mountain Division in 1942.  Just another relatively obscure grunt who went on to do great things for our country, as you have also done. You don’t need to be a war hero to be a hero for America. You just need to raise your kids right, pay your taxes and contribute. You and I are what Amity Shlaes would call The Forgotten Man.

The core of the Trump vote, by the way. Would Robert M.Soldofsky vote for Trump? Hardly, he became an academic after all.  However, there are a million Robert M.Soldofsky-types running around out there who didn’t become O-5’s in the military or thrive in academia but are grinding the gears day in, day out, without any acknowledgement of their efforts.  And that’s okay. They don’t need acknowledgement. They just want to be left alone to live as best as they see fit.

*** Side note – a couple books I’ve found fascinating about the Scots-Irish imprint on American society are here  and here.

Obviously, the guy we’re talking about, Robert M.Soldofsky, isn’t of Scots-Irish stock, Polish no doubt, but it’s all the same thing. Families left the Olde Country to come here and here, the U.S., flourished.

In fact, my great grandfather left Austria to come to the US in 1912 with his two brothers. He met my great grandmother at a church ice cream social. And the rest, as they say, is history.  But it certainly wasn’t without challenges. From my Grandad’s accounting of our family history “We were very poor when I was a child.  We lived in an area of Kansas City near the meat packing plants that was called “The Patch.”  Our two-room shack was made of wood scraps and cardboard. We had a hand pump and an outhouse outside. When I was three or four years old we moved our shack with a horse and wagon to a lot that my father purchased on Strawberry Hill. We did not have running water, but there was some extra space for my mother to plant a vegetable garden…”

Oh, I hear you, “What’s the point, Josh? Can you ever, just once, cut to the chase?”  No, no I can’t because behind these historical people and their stories are lessons we can learn from.  What’s the lesson here?  Can you see it? Can you feel it?

It was only 100 years ago that my grandfather was writing about, just 4 generations or so ago. That’s it. These people literally lived in a shack that could be moved by horse and wagon. The stock market was the farthest thing from their mind.  It was sustenance living back then, yet it was only a few generations ago!

But we were so poor that we couldn’t tell

Cotton was short and the weeds were tall

But Mr. Roosevelt’s gonna save us all

Well, momma got sick and daddy got down

The county got the farm and they moved to town

Papa got a job with the TVA

He bought a washing machine and then a Chevrolet

You know that song. While it’s easy to focus on the Wall Street part, did you overlook the more devastating part, “The county got the farm”.  Now why would that be?  Anyone wanna guess?

There are tons and tons of songs from Blues to Country and everything in between talking about being poor in the United States. For all of these people the stock market was irrelevant.  Yet, each and everyone of these people had to live somewhere. Even the Monopoly Man or Mr. Burns, or whoever you want to use to represent the rich elite, needs a place to live. And this is what makes Robert M.Soldofsky’s work so important even though it has been long forgotten.

Stocks for the Long Run we’ve been told time and again.  Well when did the Long Run start? In 1926.  Why then?  Because that’s when Roger Ibbotson started his much-heralded chart that everyone uses to show the value of stocks over time. 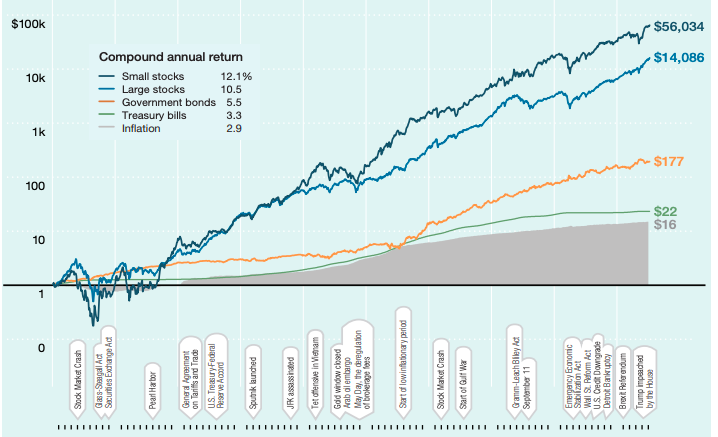 We’ve seen this a million times. Look at stocks, look at bonds, look at cash. Only a fool would not invest in stocks given this, amirite?   But this always starts in 1926? Again, I ask why?

Well Ibbotson tells us why in this interview with a professor from Yale.  And here’s what Ibbotson says:

I got a job managing the university bond portfolios while I was getting my PhD. And while I was managing that bond portfolio, everybody asked me all the time, “When are Fischer and Lorie going to update their stock market studies?” because they first had a study that went from 1926 to 1960, and then they brought it up to 1965, and then to 1968, but this was in the early ’70s now.

And thus the advent of the famous SBBI chart that you can see above. Is 1926 some magical year? Nope. Just happens to be when Fischer and Lorie started the data for which Ibbotson has become famous.

If we go back to the article I referenced at the beginning of this post though, which was based on the work Soldofsky did, well we begin to see things a bit differently, no?

Should you look at your retirement in terms of The Long Run starting in 1926 or would it make more sense to break it up into decades like what we see above?

Secondly, and this is where it gets REAL interesting, especially if you have debt on your home and are thinking stocks will outperform the bond you owe on your house. Maybe, but maybe not.

Look at this chart:

This is from “The Rate of Return on Everything, 1870–2015” authored by the Federal Reserve Board of San Francisco.   Housing, by far and away, has given you your best AND safest rates of return. Over these 145 years housing averaged just over 7% a year NET OF INFLATION with a standard deviation of less than 10%.

Stocks averaged just under 7% a year, again net of inflation, but the standard deviation was more than twice that of housing.

Bonds came in last in returns, netting all of 2.50% but doing so with half the risk as stocks.  Still 2.50% NET of inflation isn’t bad in the least, especially when we’ve been told stocks are the hedge against inflation and bonds get crushed.

Oh and do I really need to add that housing has a second aspect as well, and probably the most important…it provides you a roof over your head.

Now, one could make an argument, and it’s a legitimate one too, that when you borrow at say 2.50% net of inflation and invest in your home, that leverage is working magically for you.  I can’t argue against that. Especially given the lack of volatility as compared to stocks.  See below:

Leveraging your home to buy other real estate? Sure, if you have the risk tolerance. I don’t.  But if you’re leveraging your house and investing in STOCKS that’s a very, very risky proposition, especially going into retirement. I’d highly say DON’T DO THAT!  The risk is simply way too great.

When all is said and done, my thoughts are that the U.S. stock market has had an incredible run, post WW2. The wealth created is like nothing the world has ever seen. Regular Joe’s like you and me could become multi-millionaires due to nothing more than being in the right place at the right time.

I think those days are behind us. That doesn’t mean you sell your stocks en masse. I still own stocks and will continue to do so because if I’m wrong I want to take advantage of the magic of compounding dividends. If I’m right though and the markets under-whelm, if not lose money, I’ll be very glad to have my house. Your house is a great store of value i.e., hedge against inflation, but also as a place to lay your head to protect you from the elements.