Before I get started I want to let you know that every Wednesday at noon Eastern Time, I’ll be livestreaming on Youtube with my friend Amar Shah from Client First Capital.  We’ll be discussing investments primarily but anything else financial related that comes to mind as well.  Bring your Q’s and we’ll provide the A’s.

I can’t begin to tell you how many people scoff at my COLA projections for Social Security.  I use the Trustees report, from their INTERMEDIATE assessment, of a 2.6% increase on average for the next 75 years.

Is that high? Is it low? I’ve no idea. But it’s based in sound reasoning: It’s what the Trustees of that very system project!

Some folks, though, dispute this.  I had a financial advisor comment on my channel that he only uses “real” numbers and thus 1.3% is his COLA because that’s what Social Security averaged over the last 10 years.

“Interesting,” I responded.  “If you are only use ‘real’ numbers, those based on the past, what are you using for projected Medicare increases?”

And if we use the last 10 years for Medicare Part B premium, you get around a 3.1% average annual increase.  Shoot, if you go back 30 years Medicare Part B increases have also averaged just over 3% per year.

Now you may be asking why I’m ignoring Part D in this. Well, that’s because Part D wasn’t around 30 years ago. It started in 2006. However, the addition of Part D won’t change the calculations.

Yet last year Medicare Part B went up all of $1.50, a 1.1% increase whereas Social Security was up almost 3%!  In fact if you look at the numbers for each you see there is absolutely no correlation between the two. I did a video on this here, by the way.

Here are the past actual premium increases AND projected increases via the Center For Medicare and Medicaid Services (CMS) Trustees report 2019.  This is page 58 by the way. 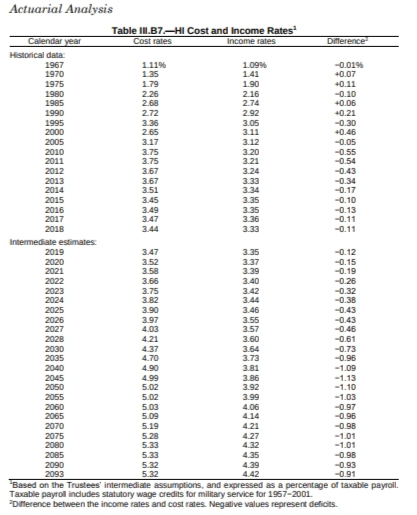 What you see is less than 4% for the next 10 years, less than 5% for 25 years after that and less than 6% from then on out.  Will that come to fruition? Who knows. But do you have a better estimate? Just gonna pull it out of the air?

My issue is we SHOULD take the actuaries from BOTH the CMS trustees report and the SSA trustees report, both using their INTERMEDIATE models and go with that.  That is the best we have.  Your assumptions, Mr. Financial Advisor, are built on sand.   This would no different than a car tinkerer in his garage thinking he can improve an engine that Toyota engineers have built.  Not going to happen.

What I think happens with many of the financial advisory business is they will discount COLAs for Social Security, all the while using HIGH COLAs for health care expenses.  They’ll throw studies around that say you’ll need $300k for health expenses in retirement all the while you’re looking at your total portfolio of $171k and thinking you’ll never be able to retire.

It’s all generated to scare you. Mind you, I can create any report with your current financial position to show you’ll be destitute and eating cat food OR you’ll be living like Bill Gates.  I’ll use the exact same numbers you currently have.  All I need to do is a tweak over here and one over there and VOILA! your’re broke or you’re rich.  Whatever I need the report to say, I can make happen. But that reporting is not based on sound logic.

My point here, my friends, is consistency is needed in one’s projections.  This is like the climate science alarmists when they use different start years to represent different catastrophes.   We’ll ignore the Medieval Warm Period, for instance. Or we’ll ignore the mass amount of cooling that happened in the middle of the 20th century and instead use our start year in 1979, to start at a very low point.  Very convenient if you want to establish a narrative. No different than showing your investment performance as starting in 2009. You will look like a genius!

By the way, I had an hour-long interview with Michelle Stirling from Friends of Science yesterday where we talk about the monied interests pushing the climate crisis scare-mongering. It’s all about the green for these people. And by green I mean the DOLLAR bill, not the environment.  You can find that video here.

Oh, I’m sure I’ll lose subscribers because of this. Don’t care.  The whole reason I started my business, Youtube channel, blog and this newsletter is to fight back against the fear-mongers, mainly in finance but also wherever we can find them.

You live in the most abundance the world has ever seen.  Not to recognize that, to be humbled actually by your luck and, if you’re Christian at least, get on your knees and thank the Lord, is to be irrational, frankly.

If you are dredging to work, again, because your advisor, or some software you found online, says you can’t retire until you have XYZ saved up, ask him… what are your assumptions? Why are you assuming this? Are they consistent? If he hems and haws, well, i’ll leave that for YOU to decide if that’s a person you want to continue to work with.

Just remember, please, the world has never been better.  Enjoy it, for Heaven’s sake!