Paul Volcker Did Not Solve INFLATION!!!

(Preaching and politics coming up….so make sure you unsubscribe now!)

I don’t know why it bothers me so when people look to Volcker as a modern-day hero for ridding us of inflation in 1982  But it does tick me off, especially given that the inflation numbers today came in much higher than anticipated and people who should know better are hoping for a return to the Volcker days.

To look through the modern insanity of the inflationary talk, I want to encourage you to buy what I think is the best treatise on modern-day economics you’ll ever read. A viewer of my Youtube channel recommended this to me a few years back and man alive did it destroy many spells that modern economics had me under.

What Koo discusses is what I’ve repeated over and over again; once you’ve been through the grind of debt repayments you never want to go back…ever, regardless of what interest rates are doing. Interest rates are meaningless to people who don’t borrow.

As Carrie Meyer wrote regarding which farmers actually went bankrupt during the run up to and during The Great Depression it was the heavily leveraged farmers.  If you had a lot of equity, or better yet, NO DEBT, you survived just fine. I won’t be so cocky to say you were living high on the hog but you had 3 hots and a cot…i.e. food and a roof over your head. No banker got your land.

Koo talks at length about how businesses in Japan were not interested in taking on debt once their balance sheets were cleaned up.  They refused leverage because of the pain they witnessed because of it in the last three decades. Farmers in the Great Depression saw it with their own eyes too. Thus, the lesson learned was, no more flippin’ debt!

So, all the posturing about how Volcker raising rates to 20% in 1982 saved us from runaway inflation, well, on its face is silly because he WAS President of the NY Fed starting in 1975 and it wasn’t like he had no say in interest rate policy.  Oh, and he was made Chair of the Federal Reserve in 1979 and interest rates certainly weren’t low during those years either yet inflation was prevalent.  Weird, huh?

In fact, I created a little chart last night showing the very, very limited correlation between increase in M2 money supply and overall CPI.
It is very hard to make a case that if M2 goes up, inflation will too. 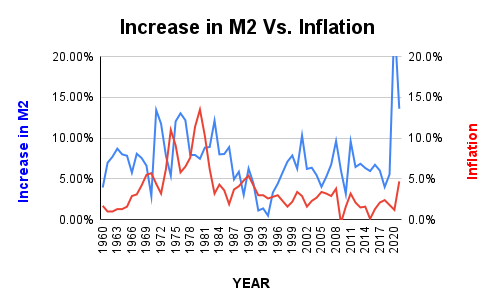 Really what I’m trying to point out is if you had no debt, who gives a rat’s behind about The Fed anyway???  Inflation you say??? Really? Let’s take a gander from the latest numbers shall we???

Look at that increase in new car prices!!!

Wow look at that increase in rents!

Hot dog! Look at that increase in OER!  (look at last column, that is increase in month over month…coming in piping hot! Just a wee lower than increase in rents!)

Now I can’t let you off the hook that easily. Because even though overall energy prices took the month off in its steady increases since Biden took the helm, food prices went on a tear.

Now why would food prices have risen so much given that energy prices went down??? Because it takes a doggone lot of energy to provide us food and the cost of energy, the input, is now only starting to be seen in the output, the food.  Expect much more of this to come.

And if you think Volcker, Yellin, Geitner, Powell, Greenspan has a thing to do with the cost of food, please buy the ocean front property in Arizona from my friend George Strait. He’s been trying to sell that place for over 30 years now.

For the love of all that is good in the world, if you own your home the main part of inflation that should worry you is what’s called the “volatile sector”, food and energy. And those two things are aligned at the hip.  Energy prices go up and a few months later food prices go up.  This is NOT hard stuff here, amigos.

The only thing that matters in a modern economy where we can continue the lifestyle we’ve come to expect these last 40-odd years is low cost of inputs (energy).  And yet, we have true believers in our own country who still believe in the “Green” fairytales.  These people are going to be the ruin of us. It’s not the M2 money supply.  It’s the insanity of renewables.

So, focus your ire towards them, please. Not the Fed.  The Fed is a false flag, basically meaningless. The Greens are doing irreparable damage RIGHT NOW, in your own backyard. For instance, California environmentalist activists are on a rampage to close down mom-and-pop loberstmen in my native state of Maine. I invite you to subscribe to this Youtube channel “The Maine Reset” for how real communities are being affected. You think they’ll stop at the working people of Maine? Again, see, George Strait.

I won’t rest until we can put the aura of Paul Volcker behind us and recognize what is the actual cause of inflation, a lack of cheap, AND READILY ACCESSIBLE energy.  Please unsubscribe if that bothers you.

P.S…
Working with everyone’s favorite youtube commentator “Denise” we’ve come up with a kick-butt name for my soon-to-be new book. It’s going to be called “Fearlessly Retire: Debunking the Inflation Myth”.
I can’t flippin’ tell you how stoked I am to release this puppy. But I’m not done with the fun of slaying fear-mongers.  In fact, it occurred to me today to take on a group who let’s just are in the shadows with their stats..if you know what I’m talking about.

I can’t tell you how many people comment on my channel with their talking points straight from these fine folks. All fear-mongering, all the time. I laugh…I actually do pray for people who live in such fear, mind you. You should too.

There is power in prayer. And the only way we work ourselves out of this conundrum we’re in is with God’s divine help. Thus pray, pray, pray my friends…and pray some more.